Supernatural Synergy of the Adolescent Kind–Manifest: A Mystyx Novel by Artist Arthur 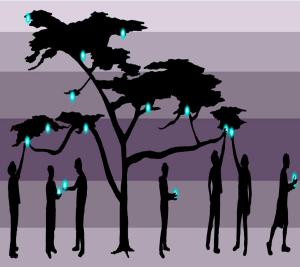 throughout her inner being

Arthur, Artist. Manifest:  A Mystyx Novel. $9.99. Kimani Tru/Kimani
Press: 2010. 978-0-373-83196-8.  People always say to beware of things that look good on the outside. One never knows the hang ups that are inside.  But why does this cute guy who suddenly appears in fifteen-year-old Krystal’s life has to be a ghost?  Some boys don’t shower or have bad breath.  But who has ever heard of a boy who is part of the undead? And the undead wants her to find his murderer.

It is bad enough that her parents have divorced, her mother remarries, and she is in a new school. Now she is the teen Long Island medium.  As Krystal struggles with this newfound power, she discovers other teens at her school, Sasha and Jake, who possess the powers of teleportation and telekinesis.  Now they want her to acclimate to her new power as if she were just adjusting to a change of clothing or hairstyle.

Arthur includes new and old ways of communication such as texting and letters from someone in the past to pull middle and high school readers into the plot.  In the middle of all of this mayhem in Krystal’s life, there is the mysterious power that may not only threaten her but everyone around her.

This novel gives adolescents an African American paranormal heroine and charts her journey of coming-of-age and coming into her powers. They will identify with her plight of accepting what makes her different as a gift instead of a curse and dealing with the real-life changes that occur in most families today. 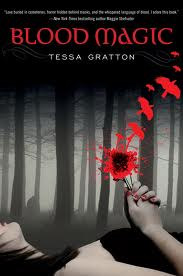 Blood Magic by Tessa Gratton  Reese and Silla have family problems of a different kind than what Krystal endures.  Their parents were killed in a murder-suicide.  The whole town thinks that they are crazy,too.  Well, piercing her finger and using the blood to conjure up the supernatural doesn’t help change public consensus.  Silla discovers her father’s journal and begins experimenting with spells.  The “blood magic” rituals catches the attention of Josephine, a centuries-old ghost who is not to be crossed.

The Good House by Tanarive Due It is often heard that the sins of the father become the sins of the children, and that which is in the dark always come into the light.  For Angela Touissant, she discovers how one person’s actions can have a detrimental, generational impact on her family.  She returns to her grandmother’s home to reconcile her own family, but she ends up challenging a formaidable spirit that may be more detrimental than the loss of her son.  Due’s narrative style will send chills up adolescent readers’ spines as her details make them feel like they are standing right beside Angela as she faces evil incarnate.

Due’s short story, “Summer,” would be another chilling work to pair with Manifest.  http://nightmare-magazine.com/fiction/summer/

From Bad to Cursed  by Katie Alender  With the name like the Sunshine Club, an adolescent girl would think that this club was harmless.  All of the girls who join it become popular and beautiful overnight.  Everyone would die to be in their shoes.  In order to be a Sunshine girl, a girl literally would die.  Behind the chillingly bright smiles is a psychic connection to a force known as Aralt.  Unfortuantely for Alexis, she has already had enough of the supernatural.  She and her sister Katie just survived Katie’s ghostly possession.  Alexis and her friend, Megan infiltrate the group in hopes of saving her sister, but Alexis soon finds out how easy it is to get the “devil” in her.

When The Sea is Rising Red by Cat Hellisen  Vampires, magic, competing royal houses—When The Sea is Rising Red is a novel that blends fantasy, the paranormal, and the fantastic into an intriguing tale of one girl’s desire to buck tradition and live life according to her rules.  Felicita is born into one of the richest ruling classes in Pelimburg.  When her best friend, Ilven, commits suicide right before she is betrothed, Felicita runs away to the mainland and tries to shed her royal ties.  The further she gets away from home, the less power she has.  The scriven dust is the root of her power and her family is the only one who manufactures it.  As she juggles her growing interest in Jannik, a vampire who also struggles with family tradition, and Dash, the mainland’s bad boy, Felicita begins to realize the true impact of Ilven’s suicide and the true identity of the sea spirit that threatens the land.

Mama Day by Gloria Naylor  Set in an island off the coast of Georgia, this novel again shows the impact of one’s actions on a family’s lineage.  Mama Day is a force to be reckoned with, a conjure woman who can cause lightning to strike with one wave of her stick.  But the beauty of Naylor’s work is how she uses the supernatural to make social commentary.  Her work is reminiscent of the late Octavia Butler’s style, whose novels Kindred and Wild Seed can also be used with Arthur’s Manifest.

Manifest is the first of the Mystyx series.  Read more about these mysterious teens who share powers that are out of this world.

Wouldn’t it be nice to have a supernatural power and to be connected to someone through it?  Oh wait, we do.  As part of the human race, we are connected by the power of love.

You've reached the Creative Space of Antiguan and Barbudan writer Joanne C. Hillhouse. Welcome. For info on my writing, services, and more, scroll down. If you need to contact me directly, email jhohadli@gmail.com. Sharing with links and credits is fine but unauthorized use and/or duplication of site content without permission is strictly prohibited. For my other blog, go to wadadlipen.wordpress.com

a blog for memoir writers

because anything is possible with Charisma

Fun characters. Successful lives. Sexy stories. Romances that will make you fall in love with love.

The Flotsam and Jetsam of a writing mind.

4 out of 5 dentists recommend this WordPress.com site

Stories, poems, and things about things.

this is... The Neighborhood

the Story within the Story

williamoconnor.wordpress.com/
Adventures in YA Publishing

All book chat. All the time.

Nail Your Novel - Writing, publishing and self-publishing advice from a bestselling ghostwriter and book doctor

boy with a hat

writing as a way of life

The Good Things Black People Do, Give and Receive All Over The World

Service Industry Stories and More Since 2012

"Hope is my catalyst."

A Good Blog is Hard to Find

An International company that offers private antique art sales to clients around the globe.

"We are all apprentices in a craft where no one ever becomes a master." - Ernest Hemingway

Shaken But Not Stirred

Scribbling In The Storage Room

A record of a writer's reading life

The Party of Ones

Life of JEM: My Life In The Inland Empire